Brief Description
Monochrome print of Rugby School, Warwickshire, showing an open field with buildings in the background, and figures playing cricket in the foreground. A group of figures, some carrying cricket bats, are assembled in the lower-right. In the middle distance are several other figures playing cricket. Buildings in the background include thatched sheds, brick structures, and to the right, a chapel or hall with rounded apse. The print uses an aquatint technique, and the name of the aquatinter, as well as the draughtsman and etcher are underneath the image. Below that is printed the title and dedication, which includes a heraldic crest in the centre surrounded by cursive script that reads: "Rugby School / as it appear'd in the Year 1809 / Is by permifsion respectfully dedicated to the Honorable the Trustees / By their much Obliged and Obedient Servant / E. Pretty". 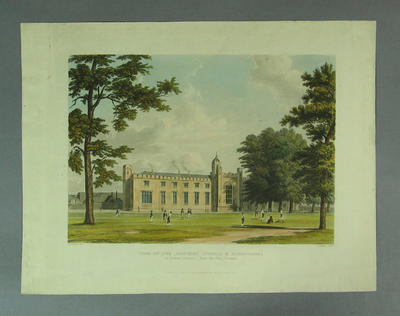 Engraving: "View of the Southern Schools and Dormitories of Rugby School"; Artwork; M8588 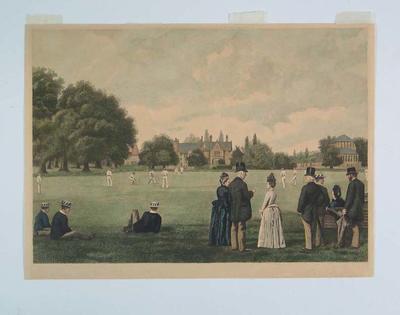