Brief Description
Diploma certificate for George Saunders from 1972 Olympics. Cream card with black text and a horizontal band of six colours across the centre. Top half has the word "Diploma" and an Olympic logo followed by "Games/ of the XXth Olympiad/ Munich/ from 26th August/ to 10th September/ 1972". Bottom half has the words "Official/ saunders george aus" and a line followed by the illegible signatures of the President and General Secretary of the Olympic Organising Committee. Most text is in French, English and German.

Credit Line
Kindly donated to the Australian Gallery of Sport and Olympic Museum by the Saunders Family. 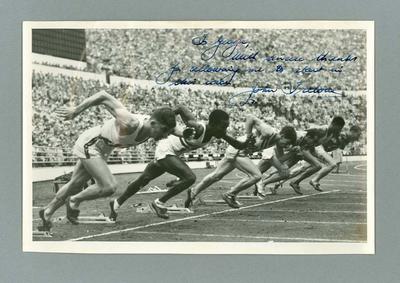