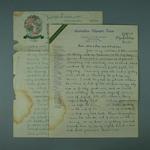 Letter from Les Harley to his family whilst at Olympic Games, August 1936

Brief Description
A 4-page letter written by Australian boxer, Leslie Harley, to his family in Melbourne, whilst at the Berlin Olympic Village with the Australian Olympic Team, competing at the 1936 Berlin Olympic Games. Harley writes about his healing arm, which was infected two months earlier, and his experiences in the ring, with his first fight against the Swiss, Von Beuren. Harley won that match, but in the next round, was defeated by the Czechoslovakian, Havelka, and thus was eliminated from the Olympic Boxing competition.

Credit Line
Kindly donated to the Australian Gallery of Sport and Olympic Museum by Les Harley.

Letter from Les Harley to his family whilst at Olympic Games, August 1936