Official Submission to Host the Games of the XXVIth Olympiad, "The Media"

Brief Description
A 68-page bronze and orange/brown hard back book, entitled, along the spine: THE MEDIA. One in a three volume boxed set, entitled: OFFICIAL SUBMISSION TO HOST THE GAMES OF THE XXVITH OLYMPIAD. This prospectus was published by the Melbourne Olympic Candidature 1996 Committee for the I.O.C., promoting the advantages and benefits of choosing the candidate city of Melbourne to host the 1996 Olympic Games, with emphasis on extant and proposed media facilities and services. The front cover features the MELBOURNE 1996 emblem and logo at the centre, amidst a bronze repetitive pattern of the Melbourne Bid emblem.

Official Submission to Host the Games of the XXVIth Olympiad, "The Media" 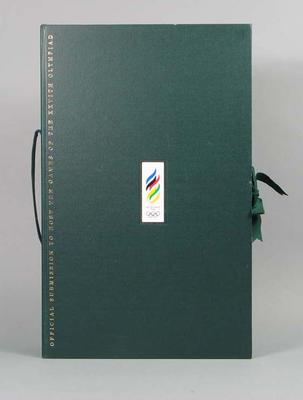