Brief Description
A small, laminated card folder containing a booklet and a pamphlet. The folder features two flaps opening outwards, revealing a pocket. On the outer flap is a close up image of a flaming torch, with the inscription, "AUSTRALIA'S / OLYMPIC / HERITAGE / SERIES / 1994 - 1996". On the inside of the outer flap is a description of the manufacture of the coins comprising the Heritage Series. On the outside of the inner flap are the nominal coin specifications. On the inside of the inner flap is the Guarantee of Authenticity. This set is numbered 18,654 in a series of 30,000. On the pocket are the Royal Australian Mint logo and the Australian Olympic Committee emblem. The booklet is titled, "AUSTRALIAN / OLYMPIC / ROLL OF / HONOUR / A complete list of every Australian Olympic Medallist. / 1896-1994". The pamphlet is titled, "1994 / THE FIRST / CHAMPIONS". It features concise biographies on Edwin Flack and Sarah Durack, who were the first Australians of each gender to win an Olympic gold medal.

Credit Line
Kindly donated to the Australian Gallery of Sport and Olympic Museum by the Royal Australian Mint. 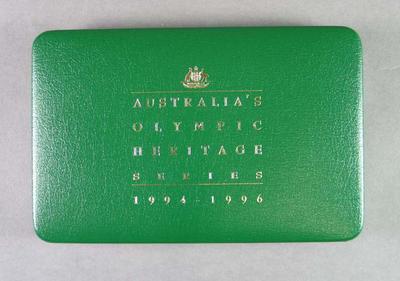