Brief Description
'Crown' Basketball arcade game. Large mechanical pinball-like game, powered by electricity, stands on four metal legs. The table is blue and red with a large perspex dome over the green 'court'. The court is moulded with holes which represent basketballers of both sides, into which the black rubber ball is flung by players by pressing keys at each end of the table. The 15 keys at each end correspond to the basketballers' numbers on either side of the holes. The aim of the game is to fling the ball from one hole to the next up the court and then into the hoops. The 2-point scores are registered by the scoreboards on either side of the court inside the dome. The game can be played by either one or two players, costing 20c for a single player and 40c for two players. There is one coin slot at the red end, and locked 'doors' at each end. Thought to have been manufactured in the 1950s. 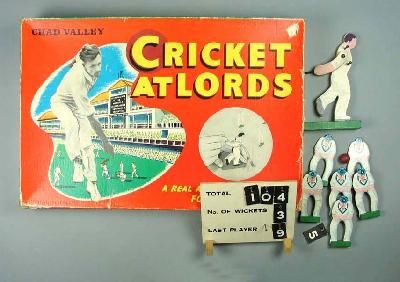