Brief Description
A photograph of a framed photographic montage created by Alice Mills, of the Xavier College football team, with each player featured in an autographed cameo portrait. At the base of the montage is the inscription: 'Presented to/THE BOYS OF XAVIER COLLEGE/BY THE/OLD XAVERIANS' ASSOCIATION/IN MEMORY OF THE/PUBLIC SCHOOL FOOTBALL CHAMPIONSHIP/1924'. To the upper right corner of the photo is another photo - a small cameo portrait of future Australian cricketer, Leslie "Chuck" Fleetwood-Smith, in his Xavier College football colours. Beneath the cameo is the hand written inscription 'Chuck', which was written at a later time by Fleetwood-Smith's wife, Beatrix. Contemporary to the photos is the handwritten inscription at the base of the mount, reading: 'To Fleetwood-Smith/15:8:24. from C. G. C[...]ley'. 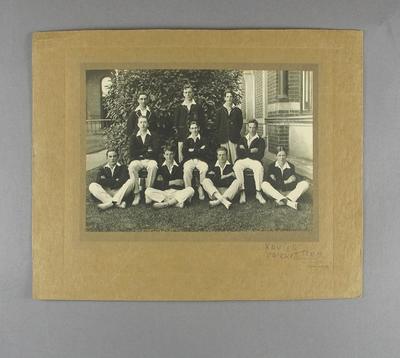