Brief Description
Rugby union honours cap; red, white and blue in colour (faded), worn by A.E.Stoddart in 1888/9. The front of the cap features an insignia that incorporates the Union Flag and the flag of the colony of New South Wales(?). Above this there is embroidered text that reads 'ANGLO-AUSTRALIA/TEAM'. There is date underneath the insignia that reads '1888'. There is label sewn onto the lining of the cap that reads 'A.S' [R.S.?]. This is a cap from the first British & Irish Lions (as they are now known) tour. Stoddart was invited to join the tour and captain the team after the sudden death in NSW of the tour captain, Robert Seddon. 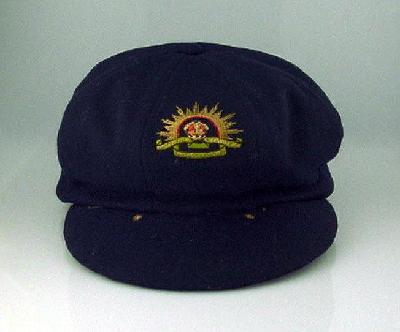