Menu: Banquet given by Kumar Shri Ranjitsinhji for the 1930 Australian XI in England

Brief Description
Menu, large, with a white cardboard cover. The front cover has a central, coloured engraving of a large house surrounded by hills, trees and a lake, at the bottom of which is printed "Ballynahinch Castle". There are gold embossed emblems above and below the picture, and one on the back cover. The top emblem on the front is of a lion passant holding a flag, with a crown above, and a flowing banner beneath reading "Nil desperandum"; the monogram below is three inter-connected letters, JVR (the R standing for Ranjitsinhji, in reference to Prince Kumar Shri "Ranji" Ranjitsinhji who was the host of the dinner and owner of the castle); and on the back is the Australian coat of arms, and the year 1930 printed below, in honour of the Australian cricket team for whom the dinner was being held. There are autographs on the back, including those of Don Bradman, P.F. Warner, Harry Preston and Arthur E.R. Gilligan. On the front cover is inscribed in black fountain pen, by Ranjitsinhji, his name, and beneath: "Ballynahinch Castle / (illegible - Toombiola?)_/Co Galway". Inside the cover is a folded sheet featuring a black and white official photograph of The Australian Team (stuck in), and a list of the menu items and the toasts, reading: "Toasts/ H.M. The King Emperor / The Australian Team / (photo -) official photograph." The menu on the other side has written at lower right "Hotel Metropole, Brighton / Monday, Sept. 1st, 1930." The cover and the inner page of the menu were originally joined by a yellow and green ribbon (the Australian colours), now separated but housed with the menu.

Menu: Banquet given by Kumar Shri Ranjitsinhji for the 1930 Australian XI in England 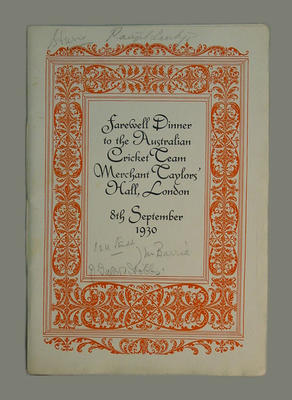