Brief Description
Group photograph of the Australian Imperial Forces cricket team that toured England and South Africa in 1919 and 1920. The picture appears to be taken outdoors but is actually photographer's studio portrait; it shows fifteen men, all but one wearing cricket whites and blazers, most with cravats, arranged into three rows on a patch of lawn in front of a hedge. The names of the sitters have been written on the photograph directly beneath the group, and the photographer's name is in the lower-right. The photograph is mounted behind brown card, with an inscription printed in gold below that reads "A.I.F. XI. in England, South Africa, and Australia / 1919 and 1920". Reg number inscribed bottom left reverse. 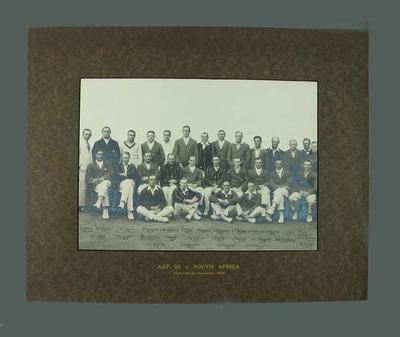