Brief Description
Black and white photograph copy with cream window mount showing four cricket players on the ground. There are two shaking hands, they are the Australian cricketers Don Bradman and Archie Jackson. It was taken at the 5th Test (Kennington Oval, London; 16,18,19,20,21,22 August 1930) which Australia won by an innings and 39 runs. Australia made 695; Bradman made 232 and Jackson scored 73. The Australians toured England in 1930 and regained the Ashes. They won the 2nd and 5th Tests, England won the first, and the 3rd and 4th Tests were drawn. This photo is part of a series (M1935 - 1947). It was produced to advertise (Kaylo) 'Gripu' trousers worn by the Australian cricketers during the 1930 Test. Above the figures on the grey card is the inscription: 'AUSTRALIAN TEST TEAM / 1930'. and beneath them it reads 'A. JACKSON SHAKING HANDS WITH D.G. BRADMAN'. Handwritten in black ink on the cream mount lower left corner it reads 'C. Trowbridge'. 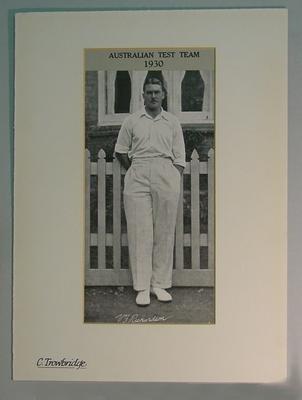