Brief Description
T.W. Sherrin Match II football with hand-painted decoration, awarded to Stuart Spencer in commemoration of the 1956 Victorian Football League (Australian Rules) Grand Final Premiership, won by the Melbourne Football Club. The ball is oval-shaped, orange in colour, and the decorations / inscriptions painted in red, black, white, blue, green and cream colours. It is comprised of 4 pieces of leather stitched together lengthways, with a horizontal leather strap stitching on the top. Painted on the top front quarter of the football is a flowing scroll inscribed with "PREMIERS / 1956", with the Olympic rings in between the scrolls (1956 also being the year of the Melbourne Olympic Games) below which is painted "MELBOURNE F.C.". Beneath this is depicted an impression of the Melbourne Football Ground with a large red demon standing in the middle, and "THE DEMONS" printed beneath his pitchfork. 3 small scrolls painted beneath read, from left to right: "·CAPTAIN· NOEL McMAHEM / ·COACH·NORM SMITH / ·VICE-CAPT.· KEN MELVILLE". Painted on the lower quarter of the same side of the ball, beneath "PRESENTED TO / STUART SPENCER / BY THE MELBOURNE TRAINERS", above a colourful oval which has been rubbed off beyond recognition, and beneath this, another small scroll reading "PLAYERS". Beneath this are inscribed all the players names: D. [Denis] CORDNER, L. WHITE, P. MARQUIS, J. LORD, I. McLEAN, F. ADAMS, / G. CASE, J. SANDRAL, B. DIXON, P. TOSSOL, L. MITHEN, S. SPENCER, / T. JOHNSON, A. WEBB, C. LAIDLAW, G. McGIVERN, R. JOHNSON, / K. CARROLL, P. COOK, B. CRAMERI, B. COLLOPY, I. RIDLEY, / D. WILLIAMS, I. THOROGOOD, T. GLEESON, A. BULL, / J. BECKWITH, R. BARASSI, A. ROGERSON, R. LANE, / C. WILSON, N. McMAHEN, R. ATKINSON, K. MELVILLE, / T. MOUNTAIN." On the other side is printed in black: "MATCH / II / SOLID HIDE / MANUFACTURED / BY / T.W. SHERRIN". 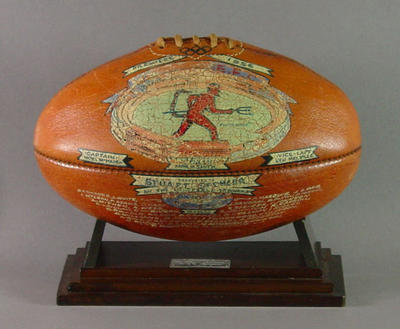