Brief Description
Sheet of 20 stamps encased in a plastic sleeve, mounted onto a black backboard, surrounded by a cream mount, and framed with a wood varnished frame. Each stamp on the sheet features the image of planet Earth showing Australia in red, surrounded by the stars of the 'Southern Cross' constellation. Along the right edge is the text, "AUSTALIA / 45c". To the right of this image on each stamp is the head of an Australian footballer with their team colours below. Above each head is the dates they were part of a Premiership team, and below is their name. Players featured on this release are (from left to right, and top to bottom); Jack Hale, Allan Ruthven, Norm McDonald, John Hyde, Bob Rose, Charlie Sutton, Ron Barassi, Brian Dixon, Graham Arthur, John Birt, Alistair Lord, Allan Jeans, Kevin Sheedy, David McKay, Sam Kekovich, Peter Knights, Dale Weightman, Tony Shaw, John Worsfold, and Mick Martyn. To the left and right of the stamp sheet is the imprinted signature of each featured player, and above the sheet is the text, "THE PREMIERSHIP PLAYERS' CLUB INC. / Second Annual Issue 2001". In the bottom left hand cover is the logo of the Premiership Players' Club (a flag motif) in gold, and printed above this in red is "027" indicating this is the 27th printed sheet in the limited issue. Attached to the mount board beneath the stamp sheet is a metal plaque reading, "THE PREMIERSHIP PLAYERS' CLUB INC. / SECOND PERSONALISED STAMP ISSUE / 28TH MARCH 2001". On the reverse is a hanging string.The framing points are also visible. 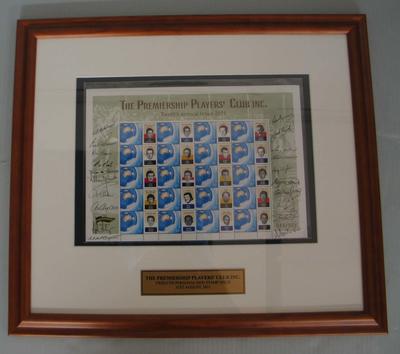