Brief Description
Hand held banner from World Cup Cricket Final between Australia and Sri Lanka. Banner given to everyone attending the match on 28 April 2007 at the Kensington Oval, Bridgetown, Barbados. Square piece of silver lurex fabric. In each corner is printed the words "Visit BARBADOS" and image of a flying fish. In the centre there is an image of a fish upright holding a cricket bat and wearing a hat and sunglasses. Underneath is an image of a flying fish and the word "BARBADOS". Surrounding the central image are two circles of writing. Outer circle reads "WHERE THE WORLD COMES TO PLAY, WORK AND INVEST" which is repeated three times. The inner circle reads "ICC Cricket World Cup 2007" and is repeated four times. 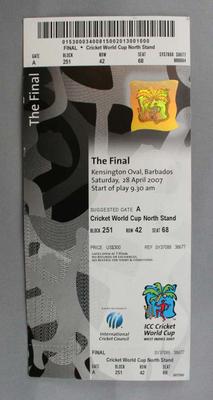