Brief Description
A personalised card of Julius 'Judy' Patching, the General Manager of the 1968 Australian Olympic Team, with the handwritten inscription on the back, reading: DEAR IRMA/A THOUGHT FROM THE/TEAM & MYSELF AS A SMALL/COMPENSATION FOR ALL THAT/TOM DID FOR US & IN/DOING SO WE SAW HIM/MUCH MORE THAN YOU/DID/SINCERELY/JUDY. This card accompanied a set of six Australian Olympic Team spoons, which were presented to Irma Wigley, in appreciation for her husband Tom's efforts during the 1968 Olympic Games, where he was an Australian Team Official. 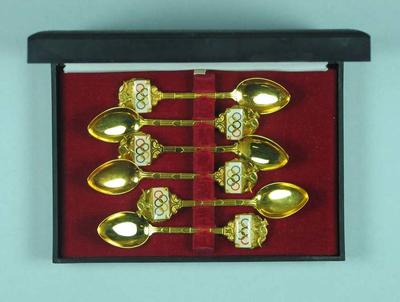